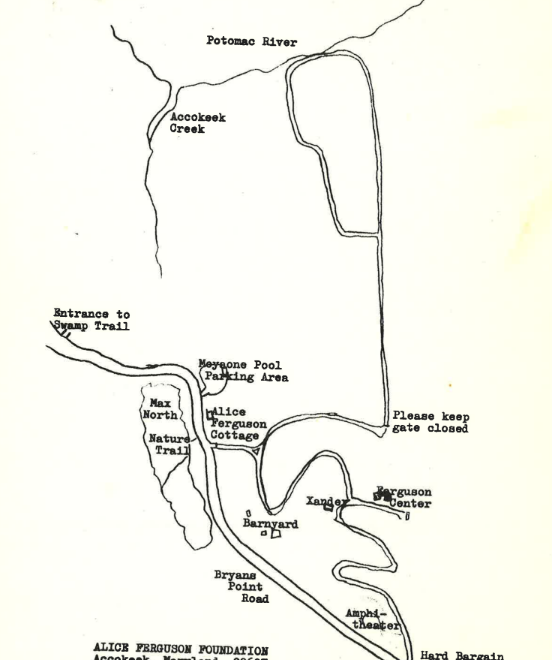 We’ve been digging through the Alice Ferguson Foundation’s historical files and found some fascinating stories that we’re excited to bring back. From time to time we’ll be sharing those findings with you. Enjoy this story about Max North’s impact on the Foundation and history of Max North Nature Trail, named in his memory.

The Alice Ferguson Foundation is developing the Max North Nature Trail in memory of one of Accokeek’s outstanding citizens, whose death in July 1964 was a great loss to our community.

Max was born November 7, 1916 in Columbus, Ohio. He attended the public grade schools in Columbus, went on to University High School there and was graduated in 1938 from Ohio State University. Max did graduate work in economics at Ohio State and the University of Chicago. In 1940 he came to Washington where he was first employed by the Civil Service Commission.

Max entered the Navy in May 1942 and served until February 1946. He worked at various times in Washington for the Department of Labor and the Bureau of the Census. For several years after the war Max left government service to carry on an insurance business and consulting service. It was during this period that he became particularly well known in the Accokeek area. At the time of his death he was Chief of the Program Research and Coordination Branch in the Business Division of the Bureau of the Census.

It was an appreciation and enjoyment of life in the country that brought Max North and his wife Louise to Accokeek to live in 1947. They were among the first residents of Bonds Retreat, the nucleus of what is now the Moyaone Reserve. A charter member of the Moyaone Association, Max partici­pated in the formulation of its policy to promote the orderly development of the land between Christ Church and the Potomac River and to preserve the open and wooded character of this area. As chairman of the Association’s early real estate committee, he was largely responsible for the Association’s first purchase of property and for development of this property as “Apple Valley.” The records show that it was he who, on March 9, 1957, first proposed to the Board of Directors that it explore such devices as protective covenants. His thorough investigation of this means of controlled land development provided guidelines for much of the real estate activity of the Association and that of its later subsidiary, the Piscataway Company, resulting in today’s Moyaone Reserve.

Max was active in many local organizations, such as the Accokeek Parent-Teacher Association, the Accokeek Democratic Club and the Accokeek Health Council. Louise North was a member of the original committee set up to organize a local educational foundation; it was Max who suggested that it be called the Alice Ferguson Foundation. He served as Chairman of the Scholar­ship Committee of the Foundation from 1957 to 1960, as Director at Large on the Board of Directors from 1958 to March 1960 when he was elected President. Always well informed about the details of the educational and charitable pro­jects of the Foundation, Max worked devotedly during his four years as president to promote Foundation goals of meeting community needs by helping people to help themselves.

During this period acquisition of Hard Bargain Farm, in which Mr. Henry G. Ferguson retains a life interest, presented the Foundation with a challenging opportunity for developing an Outdoor Education program in coopera­tion with the Board of Education of Prince George’s County. A Field Biology course for high school students and a Nature Study course for grade school students have been meeting in the area for the past three and six summers re­spectively. Mr. William L. Perry, a teacher for one of the early Nature Study groups, was appointed by Max in 1963, after discussion with the Board of Di­rectors, to outline a broad study program for the farm property. The first part of this program to be developed will be the Max North Nature Trail.

The proposed nature trail will, therefore, carry forward one of Max’s plans. It will start at a gate opening into the pasture opposite the Moyaone swimming pool. It will lead down to and across Accokeek Creek, follow the creek upstream, cross again and return to the gate by a different route. For the vigorous hiker this may seem a short trail, but with markers indicating about twenty points of interest to be examined and discussed along the way, it will not be covered quickly. A pamphlet will be available, giving brief notes on the objects to be observed at each marker. Emphasis will be placed on con­servation and on the relationship between the plant or animal life and its en­vironment throughout the changing seasons. It is expected that the Max North Nature Trail will be used by school classes, Boy Scouts, Girl Scouts and many other groups and individuals of all ages.

The Board of Directors of the Alice Ferguson Foundation is giving leadership to the development of this memorial to its late president. But Max belonged to the whole community, and we know that the whole community will want to share in honoring him. We believe there are also those, both within the community and elsewhere, who may not have known Max personally, but who share his belief in the importance of providing for greater appreciation and enjoy­ment of nature and of learning to conserve what nature has given us.

The Board therefore extends this invitation to Max’s many friends, and to others who share his interests, to participate in development of the Max North Nature Trail. Participation may be by financial contribution, by volun­teer work (we already have an offer from the Boy Scouts), by suggestions of groups who would be interested in use of the trail or by information about the special needs of such groups. If funds permit, it is hoped not only to con­struct and maintain the trail, but to support a program for its most effective utilization. You can help us by filling in the attached form and returning it to the Alice Ferguson Foundation, Inc., Accokeek, Maryland – 20607.