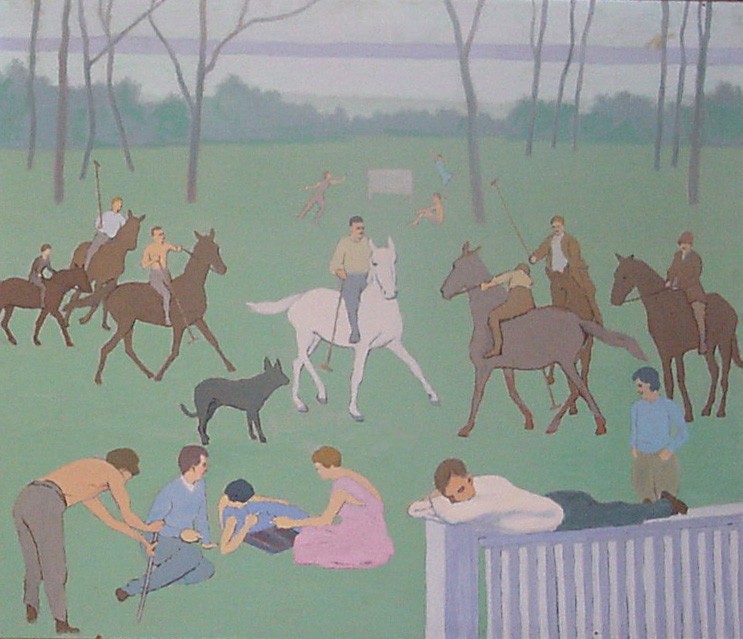 Among all of Alice Ferguson’s paintings, one of the most popular and perhaps the most playful is, “A Day at the Farm.”  Painted in the early 1930s, the painting depicts lively scenes from around the farm at that time.

Alice writes about the spirited artwork in her book, Adventures in Southern Maryland, “One winter a picture called, “A Day at the Farm” was hung in the Biennial Exhibit at the Corcoran.  The foreground was our balustrade with a member of the gang peacefully asleep on the broad rail.  Beyond, others of the gang were digging, playing backgammon, polo, deck tennis, and other games with the river as a distant background.” (Adventures in Southern Maryland, pg. 57)

Upon examining the painting, pinks, greens, and blues stand out to the viewer immediately.  The lawn of the farm is a vibrant green, accompanied with cool tones of the Potomac River and tree line in the background.  Framed by the scenic views of nature, several friends sit on horseback, playing polo.  Polo is one of the oldest team sports, played on horseback with wooden mallets.  The objective of the sport is to score a small hard ball through the other team’s goal.  Opposing, a dog, likely Alice’s dog, Caligula, stands near the horses as if ready to pounce towards the treeline.

The viewer also sees a game of “deck tennis” taking place in the distance.  Deck tennis was originated in the 1930s by mariners on the decks of both cargo and passenger vessels. The game is a hybrid between tennis and quoits, traditionally a game of throwing metal, rope, or rubber rings over a net to be caught and returned.

In addition, two women sit in the foreground playing a board game (presumably backgammon).  And in the right corner of the painting, anchoring the viewer’s gaze, a man rests on the porch railing with his head on his forearms.  Lastly, and most picturesque, in the distance past the tree line is the scenic Potomac River, just as it serves as the scenic overlook for the farmhouse today.

“A Day at the Farm” was so popular; it was featured in a regional art show.  It was selected by jury to be shown at the Corcoran Gallery of Art’s 13 Biennial of Contemporary American Paintings in 1932-33, which was one of the most important exhibitions of American art at the time.  Inclusion in this particular show was a large achievement, as artists were selected by a panel of other prominent artists who reviewed the numerous submissions.

Alice and Henry Ferguson were very interested in providing an artistic and creative space for the community, and “A Day at the Farm” clearly serves as an extension of their social and imaginative lives.  Just as the title depicts, these were activities Alice would have typically participated in with her friends and neighbors on the property.

Alice’s “gang” depicted in the painting consisted of community members and distinguished intellectuals, the identities of whom she coyly kept secretive.  She describes her crew in her book, writing, “The gang is a very heterogeneous crowd. …. [they dressed in very casual if not ragged clothes].  A newcomer asked who that person was….[and] learned that he was a university president and a scientist of international reputation.  The next question, about a man who had recently rolled in the mud, identified a diplomat, the third a mechanic.  Impressed, the visitor asked respectfully about the only man who was well dressed and treated with deference.  He?  Oh, he was a neighboring farmer who had drifted in on business and stayed to play.” (Adventures in Southern Maryland, pg. 55)

Alice also writes about the humor and playfulness of the painting’s title and her gang’s attendance to the Corcoran Gallery exhibit, “The opening night we had a celebration with the artist proudly wearing orchids.  All evening one or another of the gang hung around the picture to pick up comments.  One critic said, ‘It is not like any farm I ever saw.’ Another, ‘Do they call that farm work that they are doing?’ A third snorted, ‘When I lived on a farm I really worked.’” (Adventures in Southern Maryland, pg. 57)

The Farm truly was an inspiration to Alice as she depicts the different scenes of her social life.  In addition to expressing Alice and Henry as creative and intellectual socialites, the painting is also a testament to the uniqueness and remarkability of the farm. The scenic background serves as a focal point for the painting with the breathtaking views of the Potomac River in the distance.  The view of the river alone was what captured Alice’s interest in the property, and led to her haste purchase of Hard Bargain Farm.

Alice writes about the first time she experienced the view, “One Christmas Eve an agent took me over a dreadful road that wandered down to a farm of 130 acres.  A tumble down house and barn perched on the edge of a hill that fell away sharply to the flat fields along the Potomac.  The view was breathtaking.  Upstream the distant white city glimmered in the mist…Across the river the terraced hills of Virginia wave back and up toward the Blue Ridge.  Over all was uninterrupted sky.” (Adventures in Southern Maryland, pg. 13)

Today the painting still hangs in the Ferguson Farmhouse.  It is mounted on the wall directly across from the front door, so that it welcomes each person as soon as they enter the house.  Although the Farm scenes of today may differ, we love to stop and admire the Farm from Alice’s perspective, as she was always in awe of the enjoyment it provides.  The breathtaking view of the Potomac River still remains for us to enjoy, and with each gaze, we are connected to Alice Ferguson.

To purchase a copy of Alice’s book, please contact our Development Team at development@fergusonfoundation.org!