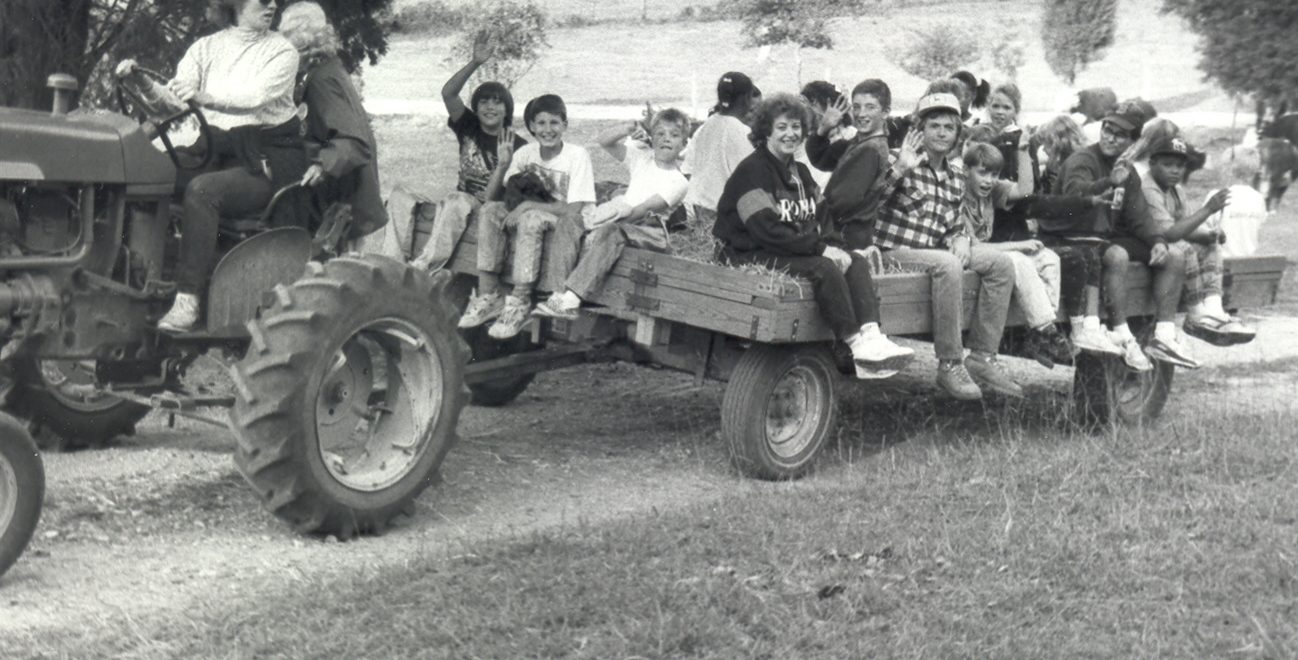 On our 68th birthday, we’re looking back at our first 20 years as the Alice Ferguson Foundation. Some things have changed, but most remain the same as the once were. Enjoy!

In 1972 Harry Patton arrived at the farm with his extensive collection of early American tools, permitting us to teach about tools in our own barnyard. The little sweet potato house was renovated to accommodate the collection, and Harry, looking every bit the old-time farmer in his overalls and straw hat, gave the children real hands-on experience in using them.

Another early arrival was Eileen Watts who came in ’73; she has been at the farm ever since as guide, farmer, amateur veterinarian, all-around trouble shoo­ter and general inspiration to everyone else. In the Spring of 1979 Bernie’s dream of having a dairy cow at the farm became reality when Eileen volunteered to take on the project and serve as dairy maid for the newly acquired Jersey cow, Favor. Under Eileen’s tutelage thousands of children have since had their first (and probably only) experience of milking a cow under Eileen’s tutelage.

A major milestone was passed when in Autumn 1976, after years of meetings, planning and all the attendant hassles, the aptly named Wareham Lodge was dedicated. With a large community room, a kitchen, an office and accommodations for twenty boys, twenty girls and chaperones Hard Bargain became truly a year­round Environmental Education Center. The program was able to handle three overnight groups per week, in addition to a steady flow of day groups Spring and Fall. Each overnight group had three classes the first day and two or three the second — depending on the ever­pressing bus schedule. By getting an early start on the second day every group had a chance to milk the cow, slop the hogs and learn a bit about blacksmithing at the forge before the other activities got under way. Countless troops of Girl Scouts occupied the Lodge on weekends; all requested a farm tour. Spring and Fall brought the Smithsonian Associates — generally parents eager for their kids to get a taste of the outdoors and a real working farm. They were given essentially the same tour as the day groups and reciprocated by sharing their cider and cookies with the guides.

In 1979 Bernie Wareham, having gotten the program firmly established, handed the reins over to Kay Powell. About this time, a subtle shift in emphasis began to occur as, under the tutelage of Steve Cardano and Tom Poe from the Charles County Community College, the staff learned more about the ecology of the wetlands and the Potomac River. We learned how to find and identify the submerged aquatic insects in the creek bottom and how to use the dip nets in swampy places and at the river’s edge. Thanks to Eileen there was an aquarium for a succession of snakes who put on a great show eating frogs or toads captured by the children.

In the early Eighties, with help from the staff at the Schmidt Center the confidence course was built on the far side of Accokeek Creek and the immensely popular “Problem Solving” was added to the curriculum. The “Survival” activity of finding the lost children was replaced by a more rigorous “Orienteering” in which the children had to make their way, with the help of compasses, around a course set up in the Max North field. Beloved animals died in the barnyard but were replaced by others who quickly became favorites. Much effort were into improving our cropland and farm management practices. Soybeans and wheat were planted to supplement the corn and hay crops. Most revolutionary of all, the women on the staff learned to drive the tractor so that they could do the wagon ride. This activity became a separate mini-class at the end of the first day for the overnighters (as it continues to be for the day groups), instead of being part of the early farm tour. Today, as in the early days of the program, the wagon ride gives the guides an opportunity to introduce the children to the shorelines of the Potomac, as well as to see (and often taste) the bounty of the cropland.

As the number of students increased each year after the completion of Wareham Lodge, just like a growing family we began to feel the need for larger and better quarters. We served a great number of handicapped students and required better access for them. We also needed a larger kitchen and staff office and, above all, better bathrooms. In 1983 when we won an award in “The National Search for Excellence in Science Education”, we caught the eye of the Maryland State legislature which gave us a capital improvement grant to upgrade the lodge. A two-story, sixteen-foot addition was constructed on the west end of the building with much free professional help given by Board and Foundation members.

During the last decade, as the problems of pollution in the Chesapeake Bay and the rivers that feed into it have become paramount in Maryland, a whole new program has been added to the activities at Hard Bargain. In 1987 the Maryland State Department of Education, recognizing our strategic location as the only environmental education center on the Potomac River, awarded us a large grant to establish a program focused entirely on the wetlands and the river. This support enabled Kay to hire Chris Swarth — a graduate biologist whose specialty is the ecology and conservation of wetlands — to set up the Potomac River Program. Making use of previous Hard Bargain activities where appropriate, Chris added new ones to help children get a better understanding of aquatic plants and animals, their relation to each other and to the environment.

The donation of eight canoes by the German Orphans’ Home Foundation made it possible to get the children right out on the water for a truly closeup study of this environment. The Potomac River Program, which runs concurrently with the regular program, draws third grade through high school groups from a wide geographical area.

So here we are at age twenty. We’ve grown and matured and our staff now includes two second generation guides, Erin Watts and Justin Woodward. We are still committed to our original mission of giving children a conservation-directed view of “Man and his Relationship to the Land”, while at the same time expanding our knowledge of the important aquatic environment around us. It could not have happened without the ideas and energies of all of you. Our future is bright.