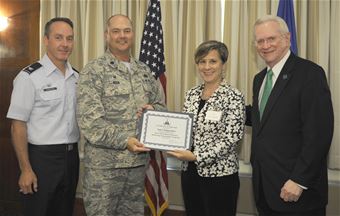 Joint Base Andrews recently inducted AFF Executive Director Lori Arguelles, along with thirteen other community and civic leaders, into the 2015 Honorary Commanders Program. New inductees were presented with certificates and honorary commander lapel pins at a ceremony luncheon held on Base May 29.

“I’m honored to be recognized amongst this wonderful group of community leaders”, said Lori Arguelles. “We value the important work performed here at Joint Base Andrews and enjoy a symbiotic relationship between AFF’s environmental mission and the critical work of the JBA commanders and Airmen to protect our nation.”

The Joint Base Andrews Honorary Commander Program encourages an exchange of ideas and experiences between key community leaders and the commanders and Airmen. Alice Ferguson Foundation and Joint Base Andrews have the benefit of an established fruitful relationship. On April 22, 6,000 volunteers removed 25 tons of trash at Joint Base Andrews, as part of the Potomac River Watershed Cleanup.

“This program allows us to partner with civilians in the community and empower them to learn more about our mission, specifically that of the Air Force and Navy,” said Col. Brad Hoagland, 11th Wing/JBA commander. “By doing this we hope to strengthen our relationships with our local neighbors.”