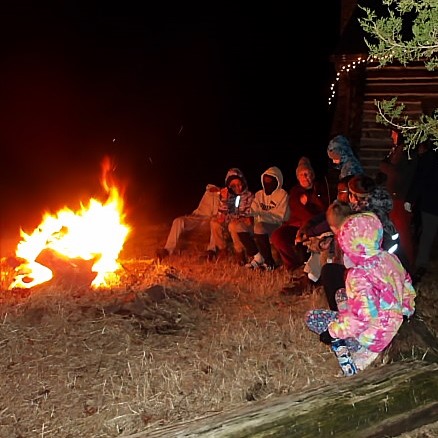 Upon arrival, the group was greeted by the Hard Bargain Farm counselors, who provided instructions regarding the stay, followed by the first activity at 5:00pm, which consisted of a cold, but fun hayride down to the Potomac to watch the sunset.

Once the group returned to the main building, called the Living Building, the Creative Critters, led by the counselors, played two fun games to get everyone to interact with each other and make new friends. The interactive games had everyone work up an appetite and so the group was excited about having some delicious pizza for dinner.

Around 7:30pm the counselors took everyone to their next activity around the campfire. The group roasted marshmallows and made s’mores, and then sang campfire songs and got to know each other a little more. After the campfire, around 9:30pm, the girls went into their cabin (Owls Nest), for the night and the boys went into theirs (Bat Cave). The overnight chaperones who watched over the two groups were Mr. and Mrs. Zarychta, as well as Mr. and Mrs. Woods.

The next morning, the Creative Critters woke up at 6:00am, and packed up their belongings to take them back to the Living Building. By 7:00am, the group was provided an amazing breakfast consisting of scrambled eggs, bacon (provided by Ms. Sue), muffins, yogurt, and fruit, all prepared by Mr. and Mrs. Woods, along with the counselors, and of course, Mrs. Sharon. Then, at 8:00am, the group was greeted at the milking shed by Ms. Eileen Watts, who shared that she had been milking cows for over 50 years. The Creative Critters were able to milk the cow ‘Opal,’ make butter, filter the cow’s milk, and even feed and pet the other farm animals.

After the groups finished hanging out with the animals, they were then introduced to Ms. Brenda Wright, who demonstrated different tools that were used by farmers in the olden times. Some of the items that she showed the group were, a tool that helped catch frogs called a “frogger,” a cow horn that helped store liquids, such as water, as well as different types of crop-gathering tools.

At 8:00am, the group started making their way up to the top of the hill, where they played a few team-building games. The rules of the first game were to balance a board by having everyone stand on it and distribute the weight evenly. The rules of the second game were that everyone had to stand next to each other on a long log and then, without talking or getting off, the group had to figured out how to line up in order of birthday months. A few tactics the group applied were to step over each other, hold each other while turning around together, or picking the younger group members up and moving them to the desired spot.

After playing the outdoor games, everyone started to get cold, so the group went back inside the Living Building to warm up and play indoor games until lunch was ready. For lunch, the parent volunteers and the counselors set out items to make sandwiches along with steaming hot soup.

At 12:00pm, the group had finished eating and everyone took a hike to the marsh across from the farm. Mrs. Sharon shared that the water had not always been there and that many years ago the area had been dry land with animals such as cows and horses roaming around. Then beavers diverted a stream, and the area became a marsh.

Once the group returned from the marsh, the educational field trip to the Hard Bargain Farm came to an end; however, all had a wonderful time.

The trip couldn’t have been possible without the many amazing counselors who guided the group through their two-day adventure, as well as the awesome 4-H volunteers who provided informative lessons, and, of course, the parent volunteers who accompanied the group to each activity, and who made sure that everyone was well taken care of. And last, but not least, Mrs. Sharon who organized this incredible trip and who guided the group from beginning to end.